China promises to “phase out” harvesting of organs from executed prisoners 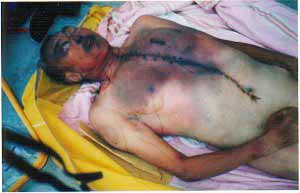 (NaturalNews) China has promised to phase out its organ harvesting operations and move to a volunteer organ donation system over the next few years, reports the Associated Press. As you read this, keep in mind that if Natural News had published an article just two days ago with the headline, “China harvesting organs from executed prisoners,” we would have been widely branded a bunch of “conspiracy theorists” who were fabricating news.

Most people, you see, are utterly clueless about reality. They have no idea what really goes on in our world: Organ harvesting, the U.N. running child sex smuggling rings, the U.S. banking system laundering drug money for the Mexican cartels, and so on. Heck, if I had told you a year ago that a Penn State football coach named Sandusky was molesting children in the university sports locker room, you wouldn’t have believed that either.

The truth is that people are reluctant to believe things they wish weren’t true. So they live in a state of never-ending DENIAL about the world, refusing to acknowledge the horrors of what really go on day after day.

China, you see, has been harvesting organs from executed prisoners since the dawn of the organ transplant industry, an industry steeped in criminality, even in the USA. It’s quite a lucrative black market, actually. If a wealthy customer needs a new kidney, you just find some guy on the street, frame him for a crime he didn’t commit, then have him executed for his organs. All the bureaucrats involved pocket a few thousand dollars each — and that’s big money in China.

(By the way, you probably didn’t know this, but the organ transplant industry routinely transplants diseased organs into recipient patients.)