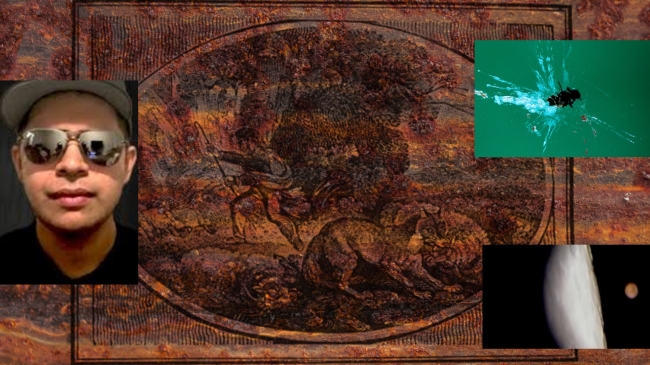 We all persevered, and today we have the powerhouse of broadcasting that IS Billy Ray Valentine, despite over a month of missed dates, unsent texts, and forgotten alarms all around! Today finds BRV a bit under the weather, no flu, just fawnk, so a recipe for that Ayurvedic classic Golden Milk is dispatched his way, posthaste (https://www.teaforturmeric.com/2016/12/authentic-turmeric-milk/). We cover a lot of areas, from his recent rant and rage due to the idiocy of folks thinking voting does ANY good, to his much-envied Rage Against The Machine tix for their upcoming show at The Garden, and LOTS in between!!

–Hot water freezes faster than cold, yes? No? Turns out no one really can say, despite some unpronounceable nomenclature. Now, Scientism says the best way to heat something up…wait for it…no, wait more…heat something best by…making it COLD first!! TADA!! Or as Josh put it, zoom from 60 MPH to100MPH by slamming on the brakes and hitting 20 MPH first!
–“Protecting astronauts from cosmic rays is one of the great challenges that needs to be solved before space agencies can send a crewed mission to Mars or beyond — that much exposure is simply too dangerous given current shielding technology.” Read it again. Didn’t we send men through the Van All–nevermind, moving on…turns out all you need is rust, not love. A good rain, a little time…voila, rust-a-riffic and space-safe!!
–Mars will have been occulted by the Moon by the time you read this…but I found this tidbit in their story…telling: “Speaking of which, be sure to watch for an optical illusion known as the ‘Coleridge Effect’ at egress. This is a phenomenon where the nearby star or planet seems to hang Proctor and Gamble-style between the horns of the crescent Moon, in seeming defiance of physics. The name comes from Samuel Coleridge’s long poem Rime of the Ancient Mariner and the line ‘one bright star, almost atween the tips (of the) horn’d Moon.'”
–Two scientific studies of the number of insects splattered by cars have revealed a huge decline in abundance at European sites in two decades. The research adds to growing evidence of what some scientists have called an “insect apocalypse,” which is threatening a collapse in the natural world that sustains humans and all life on Earth. A third study shows plummeting numbers of aquatic insects in streams…where did all the lightning bugs GO???