The U.S. death toll from fungalmeningitis linked to potentially contaminated steroid injections has risen by two to 23, with North Carolina reporting its first death, health officials said on Saturday.

Tennessee’s death total in the outbreak rose to eight, the highest state total, the Centers for Disease Control and Prevention (CDC) said on its website.

States reported 13 new cases of fungal meningitis, raising the total to 281. There are also three peripheral infections caused by injections into joints.

The outbreak stems from medications shipped by the New England Compounding Center (NECC) in Massachusetts. The company faces federal and state investigations and lawsuits over the tainted medications.

Meanwhile the CDC says the numbers continue to rise.

The medication made in Massachusetts has been recalled.

Meningitis is inflammation of the protective membranes covering the brain and spinal cord, known collectively as the meninges.[1]The inflammation may be caused by infection with viruses, bacteria, or other microorganisms, and less commonly by certain drugs.[2]Meningitis can be life-threatening because of the inflammation’s proximity to the brain and spinal cord; therefore the condition is classified as a medical emergency.[1][3]

A Howell man whose wife died less than a month ago in the fungal meningitis outbreak linked to tainted steroids is now battling meningitis himself, after initial tests indicated he did not have the disease.

“I was truly shocked. I really didn’t think he was going to have it, because of how much time has passed” since he received the Sept. 17 injection, she said. “I really thought he was in the clear.”

Bloser said her father is doing well, even joking with the nurses at the Michigan hospital where he’s now being treated.

Cary and his wife, Lilian, 67, both received injections for pain at Michigan Pain Specialists in Brighton. Lilian Cary got the shots in August and fell ill weeks later. She suffered a stroke in her brainstem Sept. 22 and died Sept. 30.

Around Oct. 12, Cary was told that spinal tap results showed he did not have meningitis. But he was also told he might need another test in a few weeks, as symptoms can take weeks or even months to develop. 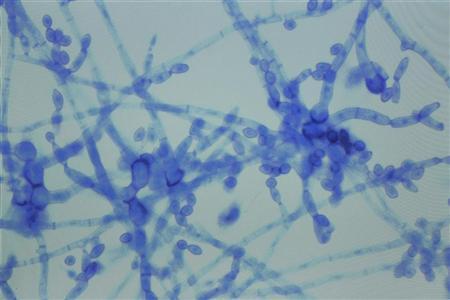 (Reuters) – The deadly outbreak of fungal meningitis tied to tainted steroid medications from a Massachusetts company expanded to 18 states on Thursday with South Carolina reporting its first probable case of the disease.

The South Carolina patient was one of 11 new cases of meningitis reported in the last 24 hours, bringing the national total to 323, according to the U.S. Centers for Disease Control and Prevention. The death toll from the outbreak was unchanged at 24, according to CDC figures. Most received steroid injections for back pain.

New England Compounding Center of Framingham, Massachusetts, shipped the steroid to 23 states and all but five of those states have reported cases of rare fungal meningitis.

The five states which have not reported cases are California, Nevada, West Virginia, Rhode Island and Connecticut.

Health officials have confirmed that some of the medication from NECC was contaminated with a fungus that they believe was injected directly into the spinal fluid of the patients.

Another five patients have been diagnosed with infections of the joints after receiving injections from the medication. These could include infections in the knee, hip, shoulder or elbow. No deaths have been reported from joint infections.

Health authorities have said they found unsterile conditions at the NECC facility, and the company faces multiple investigations. The steroid has been recalled and authorities are pulling all NECC products from the shelves nationwide

WASHINGTON (AP) — The black mold creeping into the spines of hundreds of people who got tainted shots for back pain marks uncharted medical territory.

Never before has this particular fungus been found to cause meningitis. It’s incredibly hard to diagnose, and to kill — requiring at least three months of a treatment that can cause hallucinations. There’s no good way to predict survival, or when it’s safe to stop treating, or exactly how to monitor those who fear the fungus may be festering silently in their bodies.

“I don’t think there is a precedent for this kind of thing,” said Dr. Arjun Srinivasan of the Centers for Disease Control and Prevention. Health officials and doctors have tracked down most of the 14,000 people potentially at risk for fungal meningitis, blamed for the deaths of 24 people and sickening more than 300.

“This is definitely new territory for us,” he said.

The fungus’ brown-black color signals an armor that — along with being injected near the spine —helped this mold sneak past the immune defenses of otherwise healthy people, said Dr. Arturo Casadevall, a fungal disease specialist at New York’s Albert Einstein College of Medicine.

“What we’re dealing with here is fundamentally different” from a typical fungal infection, he said. “This is a bug that most of us don’t know much about.”

But they’re learning fast, piecing together clues that promise some hope.

Doctors are beginning to detail in medical journals the first deaths in this outbreak, and the grim autopsy findings make clear that treating early is crucial, before the fungus becomes entrenched. In one case, a woman died in Maryland after the fungus pierced blood vessels in her brain, leading to severe damage.

People getting treated earlier “seem to be doing OK,” with fewer of the strokes that characterized the outbreak’s beginning, said Dr. Carol Kauffman of the University of Michigan. She has advised the CDC and co-authored advice in the New England Journal of Medicine on how to handle the complex medication used in treatment.

People who got contaminated steroid shots made by a Massachusetts pharmacy have been told to be on guard for months for meningitis symptoms. But the CDC said Wednesday that the biggest risk for getting sick seems to be within 42 days of receiving one of the implicated back injections.

To physician John Perfect, the nationwide outbreak of fungal meningitis linked to contaminated steroid injections made by a compounding pharmacy feels painfully familiar.

That’s because Perfect treated patients sickened in a nearly identical outbreak 10 years ago, when five people in North Carolina became ill and one died. Watching the unfolding of a larger, nationwide version of this nightmare — with 285 people sickened and 23 dead — feels like living through the movie Groundhog Day, in which a man is forced to relive the same horrible day over and over, he said in an interview Sunday.

Then, as now, federal officials flagged the risks posed by compounding pharmacies, which are typically regulated by state pharmacy boards rather than the Food and Drug Administration.

“We learned, or thought we learned, several important lessons from the outbreak,” Perfect wrote in an essay subtitled “Tragedy Repeated,” published Thursday in Annals of Internal Medicine.

Without that sort of cleanliness, “fungi grow aggressively,” Perfect says, perhaps because of the way that they interact with steroids, which suppress the immune system.

The September 2002 outbreak involved the same steroid, methylprednisolone acetate, as the current outbreak, although the shots were contaminated with a different fungus. Back then, patients took up to six months to develop symptoms, Perfect says.

In the current outbreak, patients have shown symptoms in one to four weeks, the Centers for Disease Control and Prevention say.

The number of cases of fungal meningitis continues to rise across the country and in Indiana. The State of Indiana confirms three more cases, which brings the total to 38.

The number of total cases now stands at 284, with three of those being peripheral joint infections. The CDC reports a total of 23 deaths. The number of deaths in Indiana that are tied to the outbreak remains at two.

Tennessee has the most reported cases and deaths, 69 and 9, respectively. Florida‘s Surgeon General has banned the New England Compounding Center from doing business in that state. A lawsuit has been filed in Indiana against companies involved with the tainted back pain medication being blamed for the outbreak.

CDC says meningitis outbreak up to 285 cases and 23 deaths

The Centers for Disease Control and Prevention said there have been 23 deaths nationally in the fungal meningitis outbreak, which authorities suspect is attributable to a compounding pharmacy in Massachusetts.

The CDC web site said Monday morning that it has 285 cases, with 16 in New Jersey and one in Pennsylvania.

The most of the problems related to a steroid injected into people’s backs to deal with pain.

The CDC site is here.