Beyond NAFTA: Shaping the Future of North American Integration


By Dana Gabriel
Be Your Own Leader 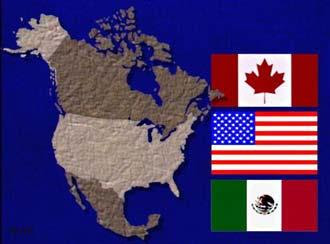 In a move that signalled the importance placed on the NAFTA partnership, Mexico’s new president visited the U.S. and Canada before his inauguration. This was seen as a step forward in further strengthening political, economic, energy and security ties between all three countries. Other recent high-level meetings and policy papers are also shaping the future of North American integration.

Before his recent trip to the U.S., Mexico’s new President Enrique Pena Nieto emphasized in a Washington Post editorial the opportunity both countries have to build on their economic partnership. He explained that, “in NAFTA we have a solid foundation to further integrate our economies through greater investments in finance, infrastructure, manufacturing and energy.” As part of his government’s strategy to reduce violence, he stated that it is, “important that our countries increase intelligence-sharing and crime-fighting techniques and promote cooperation among law enforcement agencies.” In a White House press release, Pena Nieto invited President Barack Obama to participate in the next North American Leaders Summit which will take place in Mexico sometime in 2013. With regards to U.S.-Mexico relations, Obama said that he was also looking forward to finding ways, “to strengthen our economic ties, our trade ties, our coordination along the border, improving our joint competitiveness, as well as common security issues.”