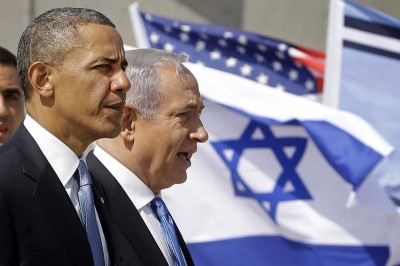 US president Barack H. Obama wrote an exclusive article for Haaretz which was titled ‘Peace is the only path to true security for Israel and the Palestinians.’ Of course, the title in itself says what many on both sides of the conflict as well as the rest of the world would want, a lasting peace between Israelis and the Palestinians. But Mr. Obama’s article is of course one-sided. He starts by saying that the children of Sderot want to grow up without living in fear disregarding how Palestinian families have been living in fear of the Israeli government since 1948:

As Air Force One prepared to touch down in the Holy Land last year, I looked out my window and was once again struck by the fact that Israel’s security can be measured in a matter of minutes and miles. I’ve seen what security means to those who live near the Blue Line, to children in Sderot who just want to grow up without fear, to families who’ve lost their homes and everything they have to Hezbollah’s and Hamas’s rockets

Since the beginning of Israel’s occupation, Palestinians have endured numerous human rights violations. From constant bombing campaigns by the US tax-funded Israeli Defense Forces (IDF), humiliating security checkpoints, kidnappings, sniper attacks and the demonization by Western Media outlets, the Palestinian people have been victims of Israeli oppression. Israel has expanded Jewish settlements on Palestinian lands and has taken control of water resources. Massacres such as in the one that occurred in the Palestinian Arab village of Deir Yassin in 1948 where over 100 Palestinian men, women and children were murdered by Israeli paramilitary forces formally known as the Irgun Zvai Leumi, a Jewish terrorist organization (Obama’s former Chief of Staff Rahm Emanuel’s father Benjamin, was a member) and Lehi (Fighters for the Freedom of Israel) or the Stern gang. It happened during the civil war that erupted between the Israelis and the Palestinians after the British rule of Palestine had ended.

Millions of Palestinian families have been displaced and exiled. Many were forced to live in neighboring countries including Jordan, Syria and Chile where a Palestinian community currently exists. Palestinians remain incarcerated in Israeli prisons without due process which is why many chose to start a hunger strike this past April. Crimes committed against the Palestinian people are numerous. However, Obama defends his administration for supporting Israel’s so-called defensive onslaught against the Palestinians. Obama mentions the tragic deaths of three Israeli teens and the Palestinian who were abducted and found murdered:

And as a father myself, I cannot imagine the pain endured by the parents of Naftali Fraenkel, Gilad Shaar and Eyal Yifrach, who were tragically kidnapped and murdered in June. I am also heartbroken by the senseless abduction and murder of Mohammed Hussein Abu Khdeir, whose life was stolen from him and his family. At this dangerous moment, all parties must protect the innocent and act with reasonableness and restraint, not vengeance and retribution

But then Obama follows-up with a comment on why the United States is committed to Israel’s security:

From Harry Truman through today, the United States has always been Israel’s greatest friend. As I’ve said time and again, neither I nor the United States will ever waver in our commitment to the security of Israel and the Israeli people, and our support for peace will always remain a bedrock foundation of that commitment

Obama’s article states what is Washington’s and Tel Aviv’s intentions are concerning the Middle East:

Our commitment to Israel’s security also extends to our engagement throughout the Middle East. Last month, under American leadership, the international community successfully removed the last of Bashar al-Assad’s declared chemical weapons from Syria. Eliminating this stockpile reduces the ability of a brutal dictator to use weapons of mass destruction to threaten not just the Syrian people but Syria’s neighbors, including Israel. And we will continue working with our partners in Europe and the Arab world to support the moderate opposition and to press for a political solution that resolves a conflict that is feeding a humanitarian crisis and regional instability.

We are also working to ensure that Iran does not ever possess a nuclear weapon. Through tough international negotiations on Iran’s nuclear program, we are attempting to peacefully address a major threat to global and regional security, including the security of Israel. We have been clear that any agreement must provide concrete, verifiable assurances that Iran’s nuclear program is exclusively peaceful, and we have consulted closely with Israel throughout this process. As we draw near to the deadline for negotiations, we do not yet know if these talks will succeed, but our bottom line has not changed. We are determined to prevent Iran from obtaining a nuclear weapon, and we are keeping every option on the table to accomplish that goal

Obama’s article mentions Syria’s president Bashar al-Assad as the “Brutal dictator” who would use weapons of mass destruction (WMD’s) against his own people and his neighbors including Israel. Obama says that his administration would continue to support “moderate opposition” forces. He made that clear when he proposed $500 million to train and arm the Syrian opposition last month in a request to Congress to approve funding for ‘overseas contingency operations’. And do not forget Iran’s nuclear program because according to Obama “we are keeping every option on the table.” Ynet news, a popular news source based in Tel Aviv published an Op-ed in 2012 called ‘Obama’s Anti-Israel Agenda’ by Dan Calic and said:

It’s difficult to imagine relations between Israel and the US getting worse, but should Obama win a second term and not need to worry about being elected again, it’s highly likely his anti-Israel agenda will grow from a tropical storm to a category 5 hurricane. To this I say Mr. Obama, you can run, but your attitude can’t hide

Well Mr. Calic, you were wrong. Obama’s article proves he is on board with Israel’s policies giving full support politically and militarily. Washington’s peace plan for Israel and the Palestinians has failed which is no surprise especially with pre-conditions that would have forced the Palestinians to accept Israel as a “Jewish State” which Obama mentions in his article. Peace is not on the agenda for the Israeli government. It never was. The tragic death of both Israelis and Palestinians is the consequences of the occupation.  A true lasting peace is the only option. Until that dream becomes a reality, the nightmare of unlimited warfare will continue. Obama ends his piece by saying “that is the future the United States remains committed to, as Israel’s first friend, Israel’s oldest friend, and Israel’s strongest friend” for once, I actually believe him.