Russia to evacuate citizens from Beirut

Russia is sending two passenger planes to Beirut to fly home Russian citizens who have fled the conflict in Syria.

The emergency situations ministry said more than 100 people were expected to board the aircraft on Tuesday.

The foreign ministry has contingency plans for the large-scale evacuation of 30,000 Russian citizens in Syria.

It would be the first such airlift since the uprising against President Bashar al-Assad began in March 2011. Moscow has been a staunch ally.

The Russian emergency ministry said Monday, Jan. 21 that it is sending two planes to Beirut to evacuate 100 Russians from Syria – the first such effort since the uprising against Bashar Assad began in March 2011. Moscow also announced contingency plans to lift 30,000 Russian nationals from the embattled country.

This evacuation of Russian nationals starting Tuesday was decided after the Syrian high command received orders from President Assad to organize mobile armored strike groups with massive fire power for a big push to run the rebel forces out of the towns, villages and areas they have captured, mostly in the north and southeast.

debkafile’s military sources report that, because they are in a hurry, the Syrian army chiefs decided to use only seasoned officers and men with experience in active service against the rebels, rather than new recruits who would need weeks of combat training. The divisions or brigades holding the line in such trouble spots as Aleppo, Homs and Deraa, are being depleted, some of their units detached for service in the new armored strike groups.
Our sources report that Iranian Revolutionary Guards Corps officers are supervising the effort for what Assad sees as his biggest assault yet to finally crush the revolt against his regime.
Its timing marks two fundamental developments in Syria’s bloody civil war:

1. The self-confidence of Assad and his top military staff is gaining in direct contrast to the weakening of the insurgency. It was therefore decided in Damascus that the time was ripe for a major offensive to push the rebels out of the strategic areas from which they could threaten central government.
2. Western-Arab arms supplies to the rebels have slowed down steeply because the funding from Saudi Arabia, Qatar and the UAR has dried up. The high-grade weapons still in rebel hands were mostly looted from Syrian army bases and stores.
3. According to debkafile’s military sources, Russian officials up to the level of President Vladimir Putin examined the Iranian-Syrian armored strike group tactics and approved.
These developments, according to Western intelligence sources familiar with the Syrian situation, explain the recently intensified coordination between Moscow, Tehran and Damascus and the resulting accelerated flow of Russian and Iranian weapons to the Syrian army.

Russian arms ships are lining up at the Syrian port of Tartus to unload their freights, while Iranian air transports are touching down and taking off at speed from Damascus and Aleppo military airports.
Arms deliveries are coming in aboard large Russian naval vessels, including the Azov and Aklexander Shabalin landing craft, the amphibious Kaliningrad and others.

To camouflage heir rapid movements in and out of Tartus, the Russian navy Sunday, Jan. 20, announced a large-scale sea maneuver would take place in the Mediterranean up until Jan. 29. None of the ships taking part in the drill were identified except to say that they came from Russia’s Baltic, North and Black Sea fleets.
Our military sources report that the Russian deliveries consist mainly of armored vehicles, self-propelling recoilless guns, all-purpose vehicles for rough terrain and a variety of missiles and rockets for combat in built-up areas – all items clearly designed to outfit Assad’s new armored strike units.
Tehran, for its part, is sending ammo, spare parts for Syrian tanks and artillery and missiles.
According to those sources, the Syrian army plans to kick off its new offensive at Daraya, a small town near Damascus which is held by the Free Syrian Army.

Russia sending aircraft to evacuate its citizens from Syria

MOSCOW — Russia is sending two planes to Lebanon on Tuesday to evacuate more than 100 of its citizens from Syria, the Emergencies Ministry said, in the clearest sign yet that Moscow may be preparing for President Bashar al-Assad’s possible defeat.Russia has been Assad’s main foreign protector during a 22-month uprising against his rule, but a diplomat conceded last month that the government had lost territory and the rebels fighting Assad could win the war.

Moscow is also carrying out what has been called its largest naval exercises since the 1991 fall of the Soviet Union in the Mediterranean and Black seas, including off Syria’s coast, which analysts say are meant to underscore its interest in the region.

“On orders from the leadership of the Russian Federation, the Emergencies Ministry is sending two airplanes to Beirut so that all Russians who want can leave Syria,” ministry spokeswoman Irina Rossius said.

“It is planned that more than 100 Russians will leave Syria” on these planes, she told the Interfax news agency.

It was unclear whether the flights were the beginning of a longer evacuation operation.

The Russian emergency ministry is sending two planes to Beirut to start evacuating Russians from Syria – the first such effort since the uprising against Bashar Assad began in March 2011. The two planes will bring home more than 100 Russians. The foreign ministry in Moscow said it has contingency plans to evacuate 30,000 Russian nationals from Syria.

The airplanes will transport more than 100 people back to Russia, a spokeswoman says, in a sign that Moscow may be preparing for the Assad government’s collapse. 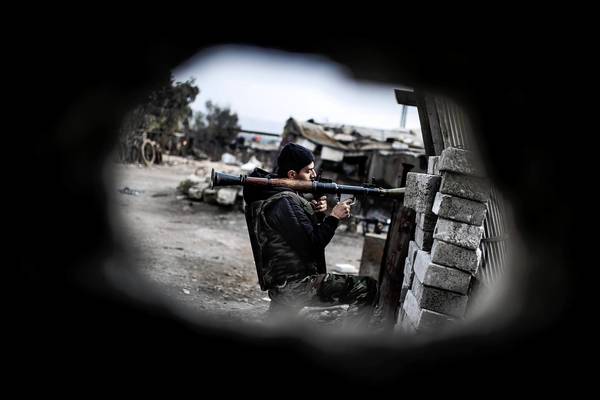 MOSCOW — Russia is sending two airplanes to evacuate scores of its citizens from longtime ally Syria, Moscow said Monday, in the latest signal that the Kremlin may be preparing for the collapse of President Bashar Assad‘s government.

The airplanes will fly to neighboring Lebanon on Tuesday and transport more than 100 people back to Russia, a spokeswoman for the Russian Emergency Situations Ministry told Russian media. The evacuees are reportedly mostly women and children.

Russia has already disclosed contingency plans for a massive naval evacuation of thousands of its nationals living in Syria. Russia this month plans to carry out large-scale naval operations in the Mediterranean, not far from the coast of Syria, though Moscow has not publicly linked the naval maneuvers to an evacuation blueprint.

It was not clear whether the planned airlift indicates that the Kremlin views Assad’s fall as imminent.

Russian officials have insisted that Moscow has no vested interest in the survival of Assad’s government, though Syria stands as the Kremlin’s last major Arab ally. But Moscow opposes U.S.-backed efforts to topple the regime and has voiced fears of an Islamic militant takeover and Iraq-style anarchy if Assad is ousted. Russia has called for a negotiated end to Syria’s conflict.

Syrian authorities still maintain tight control of the capital, Damascus, but broad swaths of the countryside — and much of the northern city of Aleppo, the nation’s commercial hub — have fallen into rebel hands. The rebellion against Assad’s rule broke out almost two years ago and has cost at least 60,000 lives, according to the United Nations.

The number of Russian citizens being flown out on the two planes is only a fraction of the thousands, perhaps tens of thousands, of Russians and Russian speakers from the former Soviet Union now residing in Syria. One Russian observer called the arrival of the two planes a trial balloon for possible large-scale evacuations.

Damascus and Moscow have had close political, commercial and cultural ties since the Cold War era. Many Syrian men received scholarships to study behind the Iron Curtain and eventually married women from Russia and other Soviet republics, often moving back to Syria with their brides and families. Syria has also been a major client for Russian weapons and military gear, and some Russian defense technicians reportedly remain in Syria.

But being a Russian in war-ravaged, profoundly polarized Syria may now be risky.

Last month, two Russian steel plant workers were abducted in Syria, and a Ukrainian journalist, Anhar Kochneva, has reportedly been held since October by Syrian rebels who are demanding a $50-million ransom.

Nonetheless, a Russian journalist based in Damascus said Monday that Russians in Syria were generally not desperate to leave the country and many are confident that Assad will hold on to power.

“No one believes that the opposition forces can capture Damascus,” Yelena Gromova, a reporter for Sovetskaya Rossiya, a Russian daily, said in a telephone interview from the Syrian capital. “The only thing to be really afraid of are random terrorist attacks.”

At least eight warships drawn from Russia’s Northern, Baltic and Black Sea fleets have launched one of its largest naval exercises in years. The, Moscow announcement Sunday did not mention Syria, but Andrei Frolov, from the Moscow military think tank CAST said last week that the nine-day drill was a reminder to the West of Russia’s links with Syria and its opposition to Western military intervention in the revolt against Assad.

Over 30 killed in car bombing in western Syria

Over 30 people have been killed and many injured in a car bombing in the town of Salmiyeh in the Syrian governorate of Hama.