Update: We found out through a little more investigation that the foster parents were still able to qualify for the mentor program, since it had been over 5 years since they had gotten in trouble with the law. This is absolutely sick.
KVUE first reported on the story last week, when on Monday, 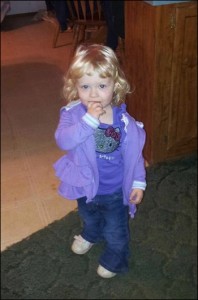 …Hill’s daughter Alexandria, or Alex as they liked to call her, was rushed to a Rockdale hospital with severe head injuries, then flown to Scott and White Children’s Emergency Hospital in Temple and immediately placed on life support.

Alex was living with foster parents after DFPS removed her from her parent’s home last November for “neglectful supervision.”

Hill admits they were smoking pot when their daughter was asleep.

“We never hurt our daughter. She was never sick, she was never in the hospital, and she never had any issues until she went into state care.”

For two months, Alex was placed in a home that Hill says was dangerous.

“She would come to visitation with bruises on her, and mold and mildew in her bag. It got to a point where I actually told CPS that they would have to have me arrested because I wouldn’t let her go back.”

In January, CPS placed her with Sherill Small in Rockdale, and Hill says things seemed safe there.

“They listened, they paid attention when we had concerns, they tried to keep us in the loop, but in the end, it wasn’t enough.”

Hill got the call Monday night that his daughter was in a Temple hospital.

“They wouldn’t tell me what condition she was in or what was wrong or what had happened. The only thing they would tell me is I needed to be there. When I got there, I found out that Alex was in a coma.”

For two days, they held out hope she would regain consciousness but on Wednesday night Alex was taken off life support.

Hill says he was less than four months away from getting Alex back and now he’ll never get the chance.

The autopsy showed death by blunt force trauma to the head. Apparently, the Texas Mentor Program doesn’t do extensive enough background searches on their foster parents, because Alexandria was not only taken from her parents for something that isn’t even a crime here in Colorado but also put her in the hands of a man charged – several times – with selling the same substance they took her away from her parents for, plus suspended license charges.