Rescuers in Afghanistan are sifting through mud for a second day after a landslide that is feared to have buried at least 2,000 people.

The UN said more than 350 bodies had been recovered in the remote north-east Afghan province of Badakhshan.

The BBC’s David Loyn in Kabul says rescue efforts are rudimentary and survivors are unlikely to be found.

Local police handed out bread and water to the thousands of people who spent the night without shelter.

Much of north and east Afghanistan has been hit by heavy rain in recent days. 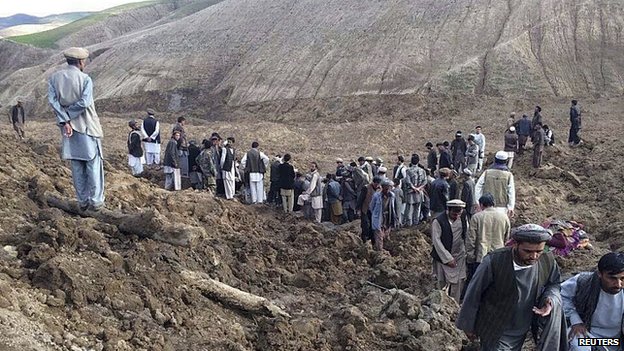 “The number of deceased has increased to 350 and significant displacement is expected,” the UN mission in Afghanistan said in a statement.

“The UN Office for the Co-ordination of Humanitarian Affairs (OCHA) is helping local authorities to rescue those still trapped.”

About 1,000 houses were affected – 300 of them buried immediately after the side of a mountain gave way.

The landslide hit on Friday morning, a day of rest in Afghanistan, meaning people were at home and whole families were lost under tonnes of mud.

Badakhshan police commander Fazludeen Ayaz told the BBC that all of the village of Hargu – home to 215 families – was covered by earth and rock.

He said it was unlikely that any survivors would be found under the rubble and that even if there was rescue equipment available in the remote area, it would be difficult to dig people out.

Badakhshan is in the most remote and mountainous part of the country, bordering Tajikistan, China and Pakistan.

The governor of Badakhshan province, Shah Waliullah Adeeb, told AP news agency that rescue crews did not have enough equipment and appealed for shovels.

He said that residents of nearby villages had been evacuated amid concerns about further landslides.

Another, smaller landslide was reported in Badakhshan on Thursday.

How to Play Retro Games on Your Modern Mac Using OpenEmu

As companies move away from old consoles and new operating systems render lots of matches unplayable, it becomes much more challenging to play all of your favourite games in yesteryear. Game conservation has never been more important, but the sector as a whole has mostly failed . Valiant efforts are made by the Internet Archive...

How to play GBA games on PC

Video games are an gas for excitement for Generation X. Since video games encompass a large amount of digital sources, there are specific games which require special software or even a device to operate. Nintendo, Play Boy, Xbox, as well as PlayStation are some examples of devices and prerequisites that individuals must possess to play...

How To Know If You’Re Losing Fat Or Muscle?

Do you ever feel like your workouts aren’t intense enough, so they’re not effective? Or maybe you wake up feeling hungry, and it freaks you out because you think your body needs to eat more food, but you’re worried it will lead to weight gain? Maybe the scale has actually gone UP even though you...