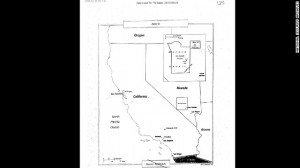 (CNN) — Area 51 has long been a topic of fascination for conspiracy theorists and paranormal enthusiasts, but newly released CIA documents officially acknowledge the site and suggest that the area served a far less remarkable purpose than many had supposed.

According to these reports, which include a map of the base’s location in Nevada, Area 51 was merely a testing site for the government’s U-2 and OXCART aerial surveillance programs. The U-2 program conducted surveillance around the world, including over the Soviet Union during the Cold War.

Area 51, about 125 miles northwest of Las Vegas, is synonymous in popular culture with government secrecy, and many have theorized that it holds the answer to one of the greatest questions plaguing mankind: Are we really alone in the universe?

But the newly released documents make no mention of alien autopsy rooms or spaceship parking lots.