Answer To Massive TB Outbreak In L.A.? Why, MORE Federal Involvement, Of Course! 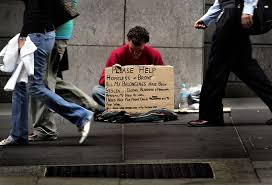 February 25, 2013 – LOS ANGELES, CA – Public health officials have launched a new, coordinated effort to contain a persistent outbreak of tuberculosis in downtown L.A.’s skid row, including searching for more than 4,500 people who may have been exposed to the disease. The Centers for Disease Control and Prevention have dispatched scientists to Los Angeles to help local health officials figure out why the disease is spreading and how to stop it. Nearly 80 tuberculosis cases have been identified and 11 people have died since 2007, most of them homeless people who live in and around skid row. Scientists have recently linked the outbreak to one tuberculosis strain that is unique to Los Angeles, with a few isolated cases outside the area. “This is the largest outbreak in a decade,” said Jonathan Fielding, director of the Los Angeles County Department of Public Health. “We are really putting all of our resources into this.” Health workers have identified about 4,650 people who probably were exposed and are trying to track them down for testing and treatment. Local and federal officials are particularly concerned because the cases are all linked to one relatively small geographic area and one vulnerable population. Officials are worried the outbreak could spread beyond skid row if action isn’t taken. Homeless people are especially at risk of getting tuberculosis and of being undiagnosed because they tend to have poor hygiene and nutrition, limited access to healthcare and ongoing contact with infected people. Transmission of the airborne disease is also common because they tend to live in overcrowded areas and to continually move among hospitals, shelters and the streets. Many homeless people also have substance abuse or mental health issues that can impede treatment. “They go from place to place and the likelihood of passing it along is much greater,” said Paul Gregerson, chief medical officer of the JWCH Institute, which runs a homeless healthcare program on skid row. “It makes everybody more susceptible.” Tuberculosis is easily passed along. It is contracted by inhaling droplets from infected patients when they sneeze, cough or laugh. When left untreated, the disease can be deadly. The skid row strain can be treated by all anti-TB medications. Treatment lasts six to nine months. The health department issued an alert several weeks ago to doctors at emergency rooms, clinics and urgent care centers informing them about the investigation within the homeless community. Most of the patients are male and about 20% are also HIV positive, according to the alert, which was obtained by The Times. Six of the eight patients who also had HIV have died. The increase of tuberculosis among the homeless population is occurring even as the county is seeing a decline in overall cases, officials said. There probably are additional cases among the homeless that have not yet been confirmed.

Thousands May Have Been Exposed To Deadly TB Epidemic in Downtown L.A.

The feds are descending on downtown Los Angeles to combat a dangerous outbreak of a drug-resistant strain of tuberculosis.

KCAL9′s Jeff Nguyen went downtown in search of people who may have been exposed.

John Williams started living at the Weingart shelter on LA’s Skid Row two weeks ago. Before he could be admitted, he had to undergo a screening for tuberculosis.