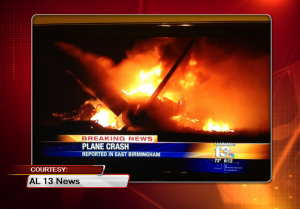 Update: CBS News has reported that the black boxes have been recovered, which may lend some information about how this all occurred.

Maybe billionaires (and former ones, like Eike Batista) have it right when they’re selling their planes: Another plane crash has been reported in Birmingham, Alabama, with two pilots of a UPS plane that missed the runway dead from their injuries. This was a huge cargo plane, which is why the debris field – estimated to be about half a mile – is so large, and probably why the pilots were DOA.

Interestingly enough, however, is the fact that a distress signal was not given out – similar to what we saw the other day with the former Microsoft Exec who’s plane went down in a suburban area in Connecticut. We will continue to report on these strange plane deaths as we get more information, but will probably keep articles such as these in the Earth Changes section of the website, since many of these indicate symptoms of solar flares and electromagnetic changes in the earth’s atmosphere.