Another Ice Storm Wreaks Havoc In The South, While Citizens Ask, ‘Is The Snow Even Real’? 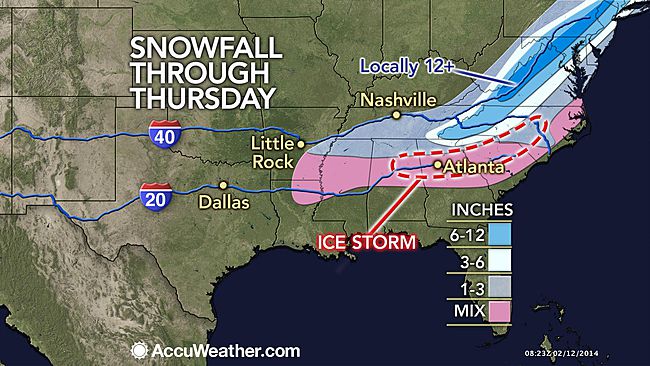 According to the Washington Post, two wintry storms have hit the Deep South in the past two weeks, with the latest encrusting highways with 1-2″ of solid ice and knocking out electricity to more than 350,000 homes and businesses.

The only reason the same thing that happened last time in Atlanta didn’t happen this time was because people learned the lesson that the government isn’t going to save them and just stayed off the roads entirely and kept their kids home from school.

There were still at least 9 people who died in traffic accidents blamed on the weather, and more than 3,000 airline flights nationwide have been cancelled.

Some people could be cold and without power for days, as a large accumulation of ice combined with wind gusts up to 30mph snapped tree limbs and power lines like twigs.

The scene in Atlanta was a little different than on January 28, when thousands of schoolchildren were stranded all night at school after less than 3 inches of snow fell in Atlanta, and countless cars were abandoned on the highways after getting stuck in traffic all night.

For the mid-Atlantic and Northeast United States, this is just the latest of a series of ice storms and snowstorms that have plagued the area, causing depletion of salt supplies and

school districts to run out of snow days. If they follow the same logic they did at the end of January, I wouldn’t be surprised if they turned the schools into boarding schools to make sure the children finish their respective grades on time.

Texas and Mississippi were hit hard last week by the same kind of weather, which resulted in a number of deaths in North Texas and Vicksburg, Mississippi.

A number of theories have come forward about the snow falling in the United States, especially during strange weather like what the South has been experiencing, and although it’s hard to tell either way, something strange is definitely going on:

The very best Antivirus Program For Your Business In 2020

The Best Managed Endpoint Safeguard And Protection Software With regards to 2020 This additionally stops data breaches by adding extra layers of protection to both your clients’ and your staff’ information. You additionally gain access to Bitdefender’s VPN that keeps internet snoops via discovering the on-line actions as well as IP address of your items....