Activists accused the United States on Sunday of trying to railroad a new Pacific trade pact with 11 partners as their trade ministers entered a second day of secretive talks.

The meetings, due to end Tuesday, are a last-gasp attempt to meet a year-end US deadline to forge a deal on the Trans-Pacific Partnership (TPP), which would cover 40 percent of the world’s economy even though it currently excludes China.

International activists opposed to the TPP — and corporate lobbyists including those supporting the pact — have also descended on Singapore to try to push their cases.

“The TPP, which is being negotiated behind closed doors by trade bureaucrats and nearly 600 corporate lobbyists, has provoked political uproar because its text has been kept secret from lawmakers in the countries it covers,” global advocacy group Avaaz said in a statement.

“If the deal is finalised, corporations will take on new powers to sue governments over regulations which threaten their future profits,” it said.

“Laws designed to protect the public, including access to cheap medicines, bans on logos on cigarette packaging, clear labelling of GM (genetically modified) products, and Internet privacy could be under threat.”

Activists said Washington was trying to railroad the talks to meet its self-imposed deadline.

US President Barack Obama has hailed the TPP as the economic centrepiece of its strategic shift towards Asia, calling it a 21st-century agreement covering non-tariff areas such as the environment and labour standards and issues such as intellectual property.

“Nearly all of the politically sensitive issues that have arisen in the secretive, closed-door TPP talks are still unresolved,” advocacy group Public Citizen said in a statement.

“So, the Obama administration has resorted to extreme tactics at Singapore to try to wring out a deal,” it added.

The advocacy group claimed the US has set up invitation-only “green room” meetings at which decisions on difficult issues can be “worked out”.

Melinda St Louis, the group’s international campaigns director who arrived in Singapore over the weekend, said the tactic was dividing developing countries at the negotiation table.

Jane Kelsey, a University of Auckland law professor also in Singapore to monitor the talks, said: “This is a very manipulative process because it marginalises those that are potential critics and makes it harder for them to continue rejecting compromised deals.”

Rodrigo Contreras, Chile’s former chief TPP negotiator who quit in March, said he thought the US wanted to close a deal now with the existing text of the proposed agreement rather than “risk” the talks extending into 2014.

But he told AFP by email from Chile any agreement would not be sustainable unless it represents the interests of all the countries.

Many officials from the other participating countries — Australia, Japan, New Zealand, Singapore, Malaysia, Chile, Canada, Mexico, Brunei, Vietnam and Peru — view it not only as an economic but a geopolitical tool.

Japanese Prime Minister Shinzo Abe, in deciding to enter talks, spoke of ensuring Tokyo’s role in shaping the future of a region marked by China’s rise.

China is involved in talks on a rival free-trade grouping in Asia called the Regional Comprehensive Economic Partnership that excludes the US.

What is the TPP? A Primer 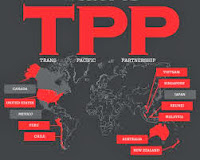 If you keep hearing about the TPP and really only have a general idea of what this is, there is a good reason for that. The negotiations have been kept a closely guarded secret, and those participating don’t want you to know what it is until it’s too late to change it.

Read on for a TPP primer.

What is the TPP?

TPP stands for Trans-Pacific Partnership. The countries involved in this proposed partnership are the US, Japan, Australia, Peru, Malaysia, Vietnam, New Zealand, Chile, Singapore, Canada, Mexico, and Brunei Darussalam. It boils down to being a massive free trade agreement, which would eliminate tariffs on goods and services and harmonize various regulations between the partner countries. If the agreement goes through, it will affect more than 40% of the imports and exports of the United States.

Why are so many people against the TPP?

One of the major issues with the TPP is its effect on Freedom of Speech. Remember how everyone was concerned about the potential ramifications of SOPA and PIPA back when the US government was trying to crack down on “internet piracy”? Well, multiply that times a billion and then don’t run it through Congress, and you have, in a nutshell, the future effects of the TPP on the Internet.

Under the guise of protecting intellectual copyrights, if the TPP goes through, the Internet will change dramatically. It could turn Internet Service Providers into watchdogs, and threaten our ability to communicate unfettered on blogs, forums, websites and social media platforms.

ISPs will be forced to monitor the content of their customers (without warrants) because it is they who will face huge liability if copyrights are “infringed” upon.

“Fair Use” policies will be restricted, existing copyrights will be greatly lengthened, and adopt criminal sanctions against those who infringe on copyrights, even without monetary motivations.

Our own Constitutional checks and balances will no longer apply. There will be no right to privacy and no due process. Webpages can be taken down based on only a complaint – proof will not be required. Innocent until proven guilty will not apply.

So, this will aid Big Businesses like the pharmaceutical industry or the entertainment industry, while it restricts the ability of citizen journalists and every day people to share information. (Learn more HERE)

How does the TPP have the potential to cause tension with China?

Did you notice the major missing participant in the TPP?

All those Asian countries are in like Flynn, but China is notably not playing ball.

The provisions deliberately exclude China. For example, yarn for clothing must come from member countries, and not from China.

This could potentially invite retaliation from China, an economic superpower in their own right.

Why is it all so secret?

And now we come to the scariest part of the TPP. No one really knows what is in it.

All of the information we have comes from documents that were leaked. We know that it has 29 chapters with regulations regarding food safety, who you can buy what product from, financial services, copyrights, and much more.

We must always be suspect of the negotiation of potentially life-altering things that are done in secret. Generally this occurs because those making the plans know that the public will adamantly oppose what they are planning. According to a spokesman from the Office of the United States Trade Representative, the general public just isn’t bright enough to grasp the finer points of the TPP, and thus should be kept in the dark until it is fait accompli.

Will you be affected?

This agreement could negatively affect everyone in the United States who works in manufacturing. It will affect those who share information on the Internet. One analysis has said that a small percentage of the wealthy will prosper, while the rest of the population will see their finances dwindle even more. It would ban “Buy American” or “Buy Local” purchasing and marketing practices. It will allow Big Pharma to increase the price of medicine and will disallow the sale of many generic medications. It will override environmental protection laws and policies that have been put in place by member countries.

So yes, you will be affected, and unless you happen to be the owner of a major pharmaceutical company or financial institution, this will not be positive for you.

Kimberly Paxton is a staff writer for the Daily Sheeple, where this first appeared. She is based out of upstate New York.