According to USA Today, more than 100 people – including 80 former NYPD officers and firefighters – in New York City have been arrested and charged in a “fake disability scheme”, and the mainstream media seems to be salivating at the chance to denigrate them even further by letting the brain-dead public have a little bit of information from approximately 3% of the cases, while subliminally probing the masses to judge them before their trials even really begin.

I think it’s possible that most of the people charged – especially the ones claiming that their disability was caused by the hell that they lived through after 9/11 – are actually permanently disabled, and that the federal government is simply punishing them for their involvement in activist groups such as “We Are Change” and others that have sprouted up as a result of a widespread awakening of consciousness in America. And the slimeball corporate media is right on board with this persecution themselves, because of many years of being utterly destroyed in any kind of legitimate debate about 9/11 since it happened.

Many of the 9/11 first responders have already died from cancers and respiratory illness caused by the dust cloud that surrounded the area, the same cloud that the EPA claimed was “safe to breathe”.

And instead of taking care of the people hurt by their mistake, the federal government denied that the WTC dust was hurting anyone until an EPA insider leaked the info in 2006, and admitted that the orders to lie came directly from the Bush Administration itself. Even worse, it took 10 years to get them to pay – through the James Zadroga 9/11 Health and Compensation Act [1] – for the first responders’ medical treatment, and that had to be forced onto them by Congress. This alone proves that the federal government didn’t care at all about the health and safety of the first responders, from the time when the sirens were blaring even up until January 2011. It also proves that the false-flag terror attack of September 11 was definitely something that could cause disability in a person, regardless of their claims.

The thousands of tons of toxic debris resulting from the collapse of the Twin Towers consisted of more than 2,500 contaminants [2],more specifically: 50% non-fibrous material and construction debris; 40% glass and other fibers; 9.2% cellulose; and 0.8% of the extremely toxic carcinogen asbestos, as well as detectable amounts of lead, and mercury. There were also unprecedented levels of dioxins and PAHs from the fires which burned for three months. Many of the dispersed substances (asbestos, crystalline silica, lead, cadmium, polycyclic aromatic hydrocarbons) are carcinogenic; other substances can trigger kidney, heart, liver and nervous system deterioration. This was well known by the EPA at the time of collapse [2].A Centers for Disease Control and Prevention (CDC) and National Institute for Occupational Safety and Health (NIOSH) funded case report performed by Mt Sinai observed carbon nanotubes in dust samples and in the lungs of several 9/11 responders.

Astonishingly, New York’s health department released a study in 2008 showing that up to 70,000 people were at risk of having a “stress disorder” as a result of their involvement in the post-9/11 nightmare.

A 2008 report by New York City’s Department of Health indicated that up to 70,000 people might have stress disorder due to the attack. The findings were the result of the city’s health registry of September 11 first responders, residents, and others.

However, instead of admitting their failures at protecting the first responders, they are aiming to crucify them using the “It’s all in your head” and “You’re making it all up” accusations. Even though the New York Times admitted in 2011 that the 9/11 terror attacks caused widespread PTSD in New Yorkers, suddenly it’s dubious to assume that the very men who dug into the piles of melting steel, concrete, and corpses for months on end could possibly have mental issues thereafter.

Many allegedly said their disability stemmed from psychiatric conditions — such as post-traumatic stress disorder, anxiety or depression — that began with their response to the Sept. 11, 2001, terrorist attacks.

Among those arrested early Tuesday were 72 retired police officers and eight firefighters.

“The retired members of the NYPD indicted in this case have disgraced all first responders who perished during the search-and-rescue efforts on September 11, 2001, and those who subsequently died from 9/11-related illness, by exploiting their involvements that tragic day for personal gain,” New York City Police Commissioner William J. Bratton said in a written statement.

Many of those arrested were part of an “insidious scheme” to profit off “the worst terrorist attack in our nation’s history,” said James T. Hayes, special agent-in-charge of Homeland Security Investigations New York.

The money allotted to those who receive Social Security Disability Insurance varies, but the average annual payout per person is $30,000 to $50,000, according to a press release from Vance’s office.

The average amount paid to date to the charged defendants was about $210,000. Although this sounds like a large amount of money, spread out over the last 12 years, it only amounts to $17,500 a year in Social Security benefits. Yeah, they’re really rolling in the dough, right there.

But even though the “they’re doing it for the money” explanation falls on it’s face when looked at from an honest perspective, that didn’t stop them. Now, they’re apparently throwing in arguments that could definitely involve false testimony (if you don’t think that could ever happen in America, check this out) and that are impossible to prove or disprove either way, unless they have it recorded on film or audio:

From approximately January 1988 to December 2013, the four principal defendants allegedly worked together to help “many hundreds of applicants to falsely claim disabilities,” said the press release from Vance’s office.

And they use the argument that, because the defendants helped others by acting as their attorney and going through the same exact process that everyone else applying for Social Security Disability does, they’re receiving “kickbacks”. That’s, of course, if you think kickbacks include a visit to a hot dog stand by one of your clients, since that’s all most of these guys could afford. No, kickbacks are what Big Pharma gives doctors for shoving toxic crap down their patient’s throats, or what politicians get when they vote to go to war in Iraq or Afghanistan. It doesn’t look like Lavallee did anything different than the thousands of other attorneys around the country helping people get what they need to survive after having their lives torn apart:

In addition to a portion of the kickbacks, Lavallee – an attorney — allegedly also received $6,000 directly from the government for attorney’s fees for each applicant, said the press release.

Once again, not that much money. Lawyers are expensive, and far more has been spent on court-appointed attorneys for real criminals than on 9/11’s first responders. 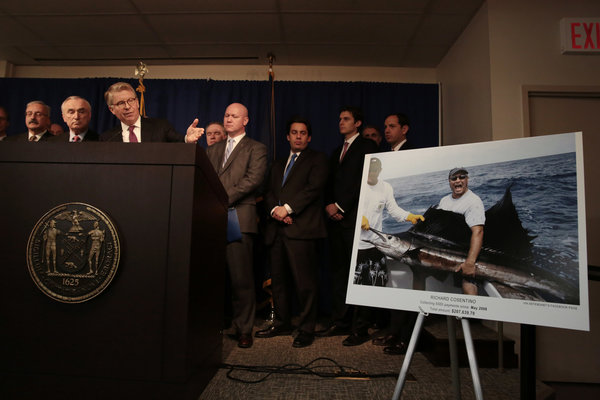 They also claim the defendants “lived lifestyles that starkly contradicted the representations made on their applications,”, which is yet another argument that we can’t prove or disprove either way.

Another interesting aspect is that they assume that, since they were totally fine before 9/11, that means they’re faking their PTSD, and that because they did their best to create a better life for themselves after what they’d been through, that they must be phony and not really disabled.

None had a history of a psychiatric condition that would qualify them for Social Security disability benefits before they filed for assistance, according to the charges.

Defendants often claimed they rarely left their homes and had limited social interactions. In reality, there were applicants who traveled by air, played recreational sports and held jobs, according to court documents.

One defendant piloted a helicopter, one worked at a cannoli stand at the San Gennaro Festival in Manhattan, one rode a jet ski and one taught mixed martial arts.

Although I agree that the jet ski’s a little much, I know many people who use martial arts as a way to heal from certain injuries, especially those of musculoskeletal or neurologic origin. Women usually prefer yoga for this purpose, but men – especially those with PTSD – want to fine-tune their basic bodily skills, especially the ones involving self-control. It makes them feel more self-confident and can even help with the feeling of demasculation  that men often feel after becoming disabled. Even teaching it should be fine to a certain extent, because remember: These guys are making roughly $17k a year from the government. That doesn’t go

very far, unless you starve yourself a few days a week and live in a basement or extra room of someone you’re not even related to because you can’t afford rent on an efficiency apartment. So in order to have the same quality of life that normal people do, they are forced to work, at least part-time.

Whoa. Wait a second. People use Facebook with one finger nowadays, and it’s actually much easier than writing on paper. And lest we forget: What are a growing number of people doing on Twitter these days? Oh yeah, being politically and ideologically active! And what would disabled 9/11 first responders possibly want with a Youtube channel? Oh, that’s right: To spread those pesky “Truther” ideologies.

Do I know for sure that these guys are definitely disabled? No, of course I don’t. But I know that the feds have lied and stretched the truth in the past themselves to get convictions in politically-motivated cases, and this whole thing kind of smells like a witch hunt. Where there may be one or two people in that whole group who could very well be faking their disability, it’s not fair to judge all of them as the same without actually seeing the evidence.

The people that were sentenced by Rudy Giuliani to dig into the pits of hell for 8 months deserve a second, third, even 100th look at the evidence before we can even begin to judge them fairly. There needs to be documentation out the wazoo and a show of malicious intent on their part for me to be okay with ruining their lives and the lives of their families.

[1] Anita Gates, “Buildings Rise from Rubble while Health Crumbles”, The New York Times, September 11, 2006, reporting on the documentary by Heidi Dehncke-Fisher, “Dust to Dust: The Health Effects of 9/11”