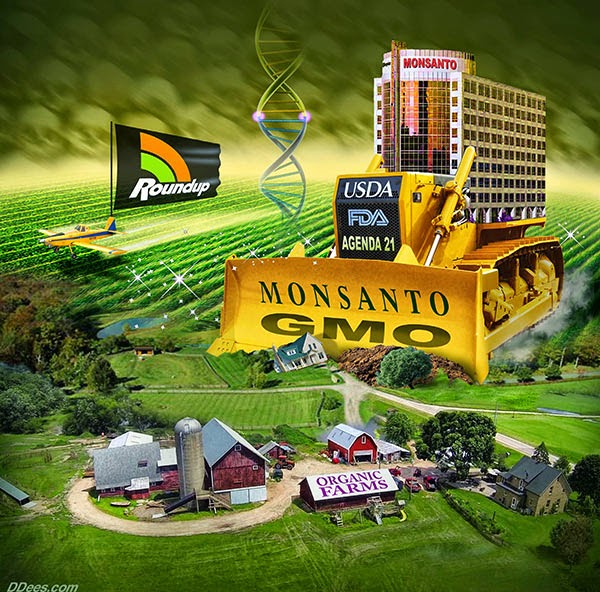 Just in case you’ve been living under a rock (or absorbing the limited range of carefully selected and controlled news reports from the corporate media), Monsanto is a sinister multinational with headquarters in Creve Coeur, Missouri, and it is engaged in the production of seriously harmful chemicals and agricultural biotechnology.

It’s the largest manufacturer of products which include genetically engineered seed and the herbicide glyphosate.

Apart from the genetically produced seed, they have also been known to produce chemicals such as DDT, PCBs, Agent Orange and bovine growth hormone among others. It has been given the name merchant of death by many groups that inform the sleepwalking masses about the dangers of using Monsanto products.

So let’s take a look at just 6 ways Monsanto is destroying humanity:

They produce genetically engineered seeds which are used to grow corn which is then fed to cows with the intention of increasing their mass. GMOs are harmful since they have been known to cause cancer; therefore, Monsanto has become a promoter of cancer.

2. Poisonous pesticides and other farm chemicals

3. Promoters of Deforestation and desertification

Monsanto clears huge tracts of forest in order to set up their farms. This means they promote deforestation which eventually leads to desertification. As years go by with this kind of practice there will be no land to produce food which will lead to hunger and finally death.

They produce synthetic nitrogen fertilizer which when sprayed on their farms is absorbed by the soil making its way to the water table. This has poisoned over two thirds of US drinking water with nitrate poisoning. Apart from poisoning drinking water, the chemicals make their way to the oceans which has led to oceanic dead zones. Examples include the Gulf of Mexico and Chesapeake bay among others.

Monsanto’s model of draining wetlands and cutting down rainforests is a big promoter of destructive greenhouse gases (within the official paradigm – Ed.). Argentina is one of the victims of Monsanto’s rainforest destruction where they have planted genetically engineered soy. The destruction of the rainforest has led to destruction of animal and plant life that depend on the forest.

Glyphosate, one of the chemicals produced by Monsanto with the intention of killing pests has found to be a contributor to new diseases in both humans and animals. The chemical, when sprayed on plants, kills the useful bacteria and leads to the formation of virulent pathogens which are introduced in the body when one consumes the food. These pathogens have led to infertility and miscarriages in animals and soon humans.

You can read more from Mick Meaney at his site RINF.com, where this first appeared.