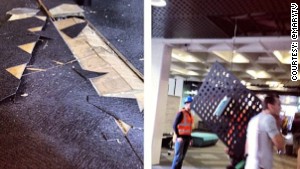 But authorities said there were no reports of serious damage.

“We’ve certainly dodged a bullet,” said Vince Cholewa, a spokesman for the civil defense ministry. “There are buildings that have lost some plaster. Some cracks in walls — nothing major.”

The epicenter of the quake was near the northern tip of the country’s South Island, 14 miles south of the town of Blenheim, the the U.S. Geological Survey said. It struck at 2:31 p.m. local time and was followed by a series of aftershocks.

The quake was felt in the capital, Wellington, on the other side of the Cook Strait that lies between New Zealand’s two main islands.

“It’s very frightening,” said Cholewa, who’s based in Wellington. “I was on the eighth floor of a building and it certainly wobbled quite well. I was under my desk well and truly.”