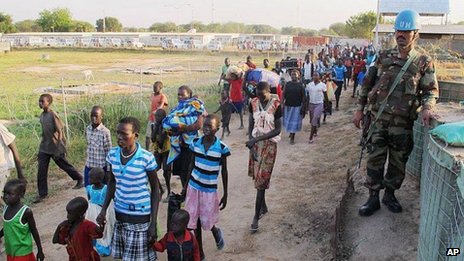 Hundreds of people are believed to have died in clashes between rival South Sudan army factions, the UN says, quoting unconfirmed reports.

UN diplomats said they had been told by sources in the capital, Juba, that the death toll was between 400 and 500.

The president of the UN Security Council told the BBC there was “potential” for civil war.

Earlier, the government said 10 senior political figures, including the former finance minister, had been arrested.

President Kiir said a group of soldiers supporting former Vice-President Riek Machar had tried to take power by force on Sunday night, but were defeated. He has ordered a dusk-to-dawn curfew in the capital.

Details of the fighting have been sketchy, but a meeting of the UN Security Council in New York on Tuesday was told that the clashes were “apparently largely along ethnic lines”.

French UN ambassador Gerard Araud, who holds the rotating presidency of the Security Council, said up to 20,000 people had taken refuge in the UN mission in Juba.

He said the council had received only “patchy information” in a briefing given by UN peacekeeping chief Herve Ladsous.

“Some reports are speaking of hundreds of casualties. For the moment we can’t confirm this, but in any case it is a heavy toll,” Mr Araud told the BBC.

He said the conflict had “the potential of a civil war” between the two main ethnic groups, the Dinka and the Nuer.

However, the governor of Unity State, Simon Kun Pouch, was quoted on the government website as saying that the conflict had nothing to do with tribes.

“There are people out there saying what has happened is between the Dinka and the Nuer tribesmen. We the leaders of this country would want to state here that this is not true,” he said.

“If you see the people going with Dr Riek [Machar], some are Dinkas, some are Chol, Nuer and other tribes,” he added.

Amid the violence, the US has ordered all its non-emergency embassy staff to leave the country immediately.

Fighting then continued into Monday when the government said it was back in full control.

However, fresh gunfire erupted on Tuesday near the presidential palace and many other areas of Juba.

Government officials say they are hunting for Mr Machar, who is believed to be in hiding.

Information Minister Michael Makuei Lueth told the BBC that his whereabouts have been unclear since the start of fighting on Sunday.

He said Mr Machar – who leads a dissident faction within the SPLM – was thought to have escaped with some troops.

Many were members of the cabinet that was sacked in its entirety in July.

South Sudan has struggled to achieve a stable government since becoming independent from Sudan in 2011.

The independence referendum was intended to end a decade-long conflict, led by the SPLM, against the north.

But the oil-rich country remains ethnically and politically divided, with many armed groups active.