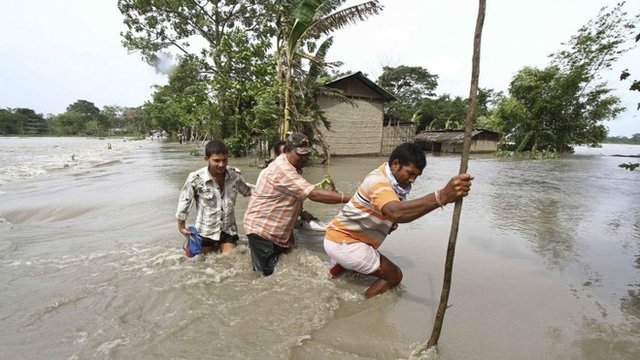 September 25, 2012 – Guwahati, INDIA – Floods have forced nearly 1.5 million people to flee their homes in north-eastern India where authorities have declared a health alert, officials said on Monday. “Eighteen of 27 districts of Assam have been hit by floods with 1.5 million displaced and 11 people drowned in separate incidents in the past week,” the Disaster Management agency said in a statement. The floods, caused by relentless rains, marked the second round of massive flooding in two months to hit India’s impoverished northeast and come towards the end of India’s June-to-September monsoon season. Nearly 130 people died and six million were displaced by floods in Assam state in July. Rescue officials said in the latest floods, at least 2,200 villages had been swamped by overflowing waters from the rain-swollen Brahmaputra River. Himanta Biswa Sarmah, the health minister of Assam state, told AFP that a “maximum health alert” to avert outbreaks of diarrhea or diseases such as typhoid had been declared in the devastated zone. The annual monsoon provides vita 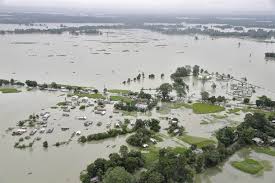 l irrigation for India’s farmers but also claims many casualties from flooding and landslides. Officials said flooding victims had been evacuated to temporary shelters on higher ground. “We’ve dispatched doctors and paramedics to ensure there is no outbreak of disease,” Sarmah said in Guwahati, Assam’s largest city. Victims and an opposition party staged protests in flood-hit areas against what they said were shortages of emergency supplies in the Congress-ruled state. “The government has failed to provide adequate relief supplies including food and medicines,” said Sarbananda Sonowal, a local leader of India’s main opposition Bharatiya Janata Party. “In many parts of the state people are even living without food,” he added. Rehab India Foundation, a voluntary group said heavy rains disrupted its plans to supply food and other essential items to flood-hit people. Almost the entire 420 square kilometers (162 square miles) of Kaziranga National Park was also flooded, the Press Trust of India reported. The wildlife park is home to the world’s single largest population of one-horned rhinos. A 2012 census in Kaziranga counted 2,290 of the rhinos, out of a global population of 3,300. The species declined to near extinction in the early 1990s and is listed as “vulnerable” by the International Union for Conservation of Nature. –

September 25, 2012 – CALIFORNIA – Hurricane Miriam became a Category 3 storm Monday as it churned in the Pacific Ocean several hundred miles off the Mexican coast, U.S. forecasters said. Miriam had sustained winds of 120 mph as it roared about 405 miles southwest of the southern tip of Baja California, Mexico, moving on a northwest track at 9 mph, the National Hurricane Center in Miami said in its 5 p.m. EDT advisory. The hurricane center said Miriam was expected to slow down, lose power and gradually turn to the north Wednesday. Hurricane-force winds were extending out up to 30 miles from its center, with tropical storm-force winds reaching out up to 125 miles. Winds gusting to 43 mph were reported at Clarion Island. No watches or warnings were in place, but dangerous surf and swells were forecast for the south and west coasts of the southern Baja Peninsula during the next couple of days.

September 25, 2012 – ASIA – Strengthening of Typhoon Jelawat Monday has boosted the mighty storm’s status to “Super-typhoon.” The powerful and extremely dangerous storm has continued to be of great interest to residents of northern Philippines and Taiwan. Those land masses could eventually feel directs effects of Jelawat, depending upon the path it takes. Jelawat was not yet a “super-typhoon” at the time (about 0600 UTC Monday) of this impressive visible satellite shot, showing the tight, small eye of a well-wrapped tropical cyclone. Southern Philippines is at the lower left. By 1200 UTC, Monday, top sustained winds about the tightly wrapped storm were reckoned to be 130 knots, or 150 mph, the Joint Typhoon Warning Center (JTWC) said. The JTWC define ‘super-typhoon’ as a typhoon having highest 1-minute surface winds of at least 65 m/s (130 knots, 150 mph). Late Monday morning, Eastern Time, the eye of Jelawat was located about 435 miles east of Manila, Philippines. Storm movement was towards the north-northwest at 5 mph, according to the JTWC. The storm’s dangerous winds and heaviest rains were well east of the Philippines. However, interaction of the storm with the monsoon flow was triggering locally excessive rains in southeastern Philippines. As it drifts towards the north and west, Jelawat will pose little or no direct threat to land before at least Wednesday, although it will continue to be a very powerful and dangerous storm. However, beginning Wednesday, the exact path taken by the storm would be critical for both the Philippines and Taiwan. Although the JTWC have forecast a track east of any land through at least Friday, when a position east of Taiwan is expected, some numerical forecast models have shown a more westerly track, passing over or near the northern mainland of the Philippines. Likewise, the more westerly scenarios could imply a late-week threat to Taiwan. Elsewhere, Jelawat was joined as of Monday by a second tropical cyclone, the much weaker Tropical Storm Ewiniar. Ewiniar was only a minimal tropical storm as of late morning, Eastern Time, having a center about 1,000 miles south of Tokyo, Japan. Ewinar was forecast to strengthen by midweek, but without posing any threat to mainland Japan or any other sizable land mass.