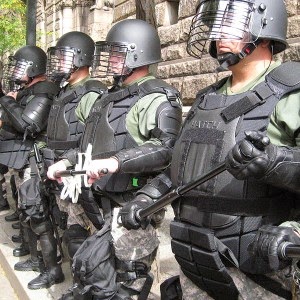 Virtually everything that you do is being watched.  Do you drive a car?  Do you watch television?  Do you use a cell phone?  As you do any of those things, information about you is being recorded and tracked.  We live at a time when personal privacy is dying.  And it is not just governments that are doing this.  In fact, sometimes private companies are the biggest offenders.  It turns out that gathering information about all of us is very, very profitable.  And both government entities and private companies are going to continue to push the envelope when it comes to high tech surveillance until people start objecting to what they are trying to do.

If we continue down the path that we are currently on, it is inevitable that we will end up living in an extremely restrictive “Big Brother” police state where basically everything that we do is very closely watched, monitored, tracked and controlled.  And such a day may be much closer than you think.  The following are 10 examples of how “Big Brother” is steadily creeping into our daily lives….

#1 Our cars are rapidly being transformed into high tech “Big Brother” surveillance devices.  In fact, a push is being made to require all new vehicles to include very sophisticated black box recorders…

As if the government wasn’t already able to track our movements on the nation’s highways and byways by way of satellites, GPS devices, and real-time traffic cameras, government officials are now pushing to require that all new vehicles come installed with black box recorders and vehicle-to-vehicle (V2V) communications, ostensibly to help prevent crashes.

Yet strip away the glib Orwellian doublespeak, and what you will find is that these black boxes and V2V transmitters, which will not only track a variety of data, including speed, direction, location, the number of miles traveled, and seatbelt use, but will also transmit this data to other drivers, including the police, are little more than Trojan Horses, stealth attacks on our last shreds of privacy, sold to us as safety measures for the sake of the greater good, all the while poised to wreak havoc on our lives.

Black boxes and V2V transmitters are just the tip of the iceberg, though. The 2015 Corvette Stingray will be outfitted with a performance data recorder which “uses a camera mounted on the windshield and a global positioning receiver to record speed, gear selection and brake force,” but also provides a recording of the driver’s point of view as well as recording noises made inside the car. As journalist Jaclyn Trop reports for the New York Times, “Drivers can barely make a left turn, put on their seatbelts or push 80 miles an hour without their actions somehow, somewhere being tracked or recorded.” Indeed, as Jim Farley, Vice President of Marketing and Sales for Ford Motor Company all but admitted, corporations and government officials already have a pretty good sense of where you are at all times: “We know everyone who breaks the law, we know when you’re doing it. We have GPS in your car, so we know what you’re doing.”

#2 A new Michigan law will ban thousands of preppers and small farmers from owning farm animals.  What are they going to do next?  Ban us from growing our own food?

#3 Have you ever collected anything?  If so, the FBI might swoop in and grab your collection someday even if you have not committed a crime.  If you think that this sounds crazy, you should consider what happened to a man named Don Miller recently…

FBI agents Wednesday seized “thousands” of cultural artifacts, including American Indian items, from the private collection of a 91-year-old man who had acquired them over the past eight decades.

An FBI command vehicle and several tents were spotted at the property in rural Waldron, about 35 miles southeast of Indianapolis.

The FBI did not have any evidence that a crime had been committed prior to seizing the collection, and Mr. Miller has not been arrested or charged with any crime.  The FBI says that it is going to catalog the collection “to determine whether some of the items might be illegal to possess privately”…

The aim of the investigation is to determine what each artifact is, where it came from and how Miller obtained it, Jones said, to determine whether some of the items might be illegal to possess privately.

#4 A father of a 4-year-old girl has been told that he will no longer be allowed to send healthy homemade lunches with his daughter when she attends her pre-kindergarten program because they conflict with federal guidelines.

#5 Do you watch television?  Well, if you have a newer television there is a very good chance that your television is watching you as well…

In November, the British tech blogger Doctorbeet discovered that his new LG Smart TV was snooping on him. Every time he changed the channel, his activity was logged and transmitted unencrypted to LG. Doctorbeet checked the TV’s option screen and found that the setting “collection of watching info” was turned on by default. Being a techie, he turned it off, but it didn’t matter. The information continued to flow to the company anyway.

#6 A plan that is being proposed in Fairfax County, Virginia would ban “frequent and large gatherings at neighborhood homes“.  This would include parties, scout gatherings and home Bible studies.

#7 At a public school in Florida, a 12-year-old boy has been banned from reading the Bible during “free reading time”…

A Florida schoolteacher humiliated a 12-year-old boy in front of an entire class after she caught him reading the Bible during free reading time.

The teacher at Park Lakes Elementary School in Fort Lauderdale ordered Giovanni Rubeo to pick up the telephone on her desk and call his parents.

As the other students watched, the teacher left a terse message on the family’s answering machine.

“I noticed that he has a book—a religious book—in the classroom,” she said on the recording. “He’s not permitted to read those books in my classroom.”

#8 In the USSA, a young child cannot even build a tree fort with his friends without the threat of being confronted by the police state.  Just consider what happened to one little fifth-grade boy down in Georgia a few weeks ago…

A fifth-grader says he was terrified when a police officer pointed a gun at him and his friends while they built a tree fort.

Omari Grant, 11, said he and his friends often play in a wooded area behind his home and were building a fort when a neighbor in the next subdivision called police to complain about what the boys were doing.

But no one anticipated what Omari and his mother say happened next.

The officer reportedly used very filthy language as he pointed his gun at the boys, and he forced them to get out of the tree and lay down on the ground…

“I was thinking that I don’t want to be shot today, so I just listened to what they said,” Omari said.

Omari said the officer holding his gun also used foul language and made him and his friends lay down on the ground.

“I learned that they’re supposed to help you not make you feel scared to even come outside,” Omari said.

#9 People like to joke about “the eye in the sky”, but it is no joke.  Technology that was originally developed for “blanket surveillance” during the Iraq war is now returning home…

Persistent Surveillance Systems has developed a surveillance camera on steroids. When attached to small aircraft, the 192-megapixel cameras record the patterns of the planetary life they fly over for hours at a time. According to the Washington Post, this will give the police and other customers a “time machine” they can simply rewind when they need it.

Placed strategically at the highest points of any town or city, these cameras could provide the sort of blanket surveillance that’s hard to avoid. The inventor of the camera, a retired Air Force officer, helped create a similar system for the city of Fallujah, the site of two of the most violent battles of the U.S. occupation of Iraq. It’s just one example of how wartime surveillance technologies are returning home for “civilian use.”

#10 Have you ever purchased storable food?  If so, you should know that it is now considered to be “suspicious activity” in some areas of the country.  Just check out what is happening in New York state…

1-866 SAFE NYS is part of Safeguard New York, an NY State counterterrorism program that uses promotional material to encourage citizens to report people for engaging in “suspicious activity….which makes them stand out from others”.

For even more examples like this, please see my previous article entitled “19 Signs That America Is Being Systematically Transformed Into A Giant Surveillance Grid“.

Sadly, most Americans are totally oblivious to all of this.

Most Americans are so addicted to entertainment and to their electronic devices that they have no idea what is going on in the real world.

I came across the following video entitled “Look Up” on YouTube earlier today.  I think that it does a great job of showing what our obsession with our electronic devices is doing to us.  Watch it for yourself and see what you think….

This article first appeared here at the American Dream.  Michael Snyder is a writer, speaker and activist who writes and edits his own blogs The American Dream and Economic Collapse Blog. Follow him on Twitter here.